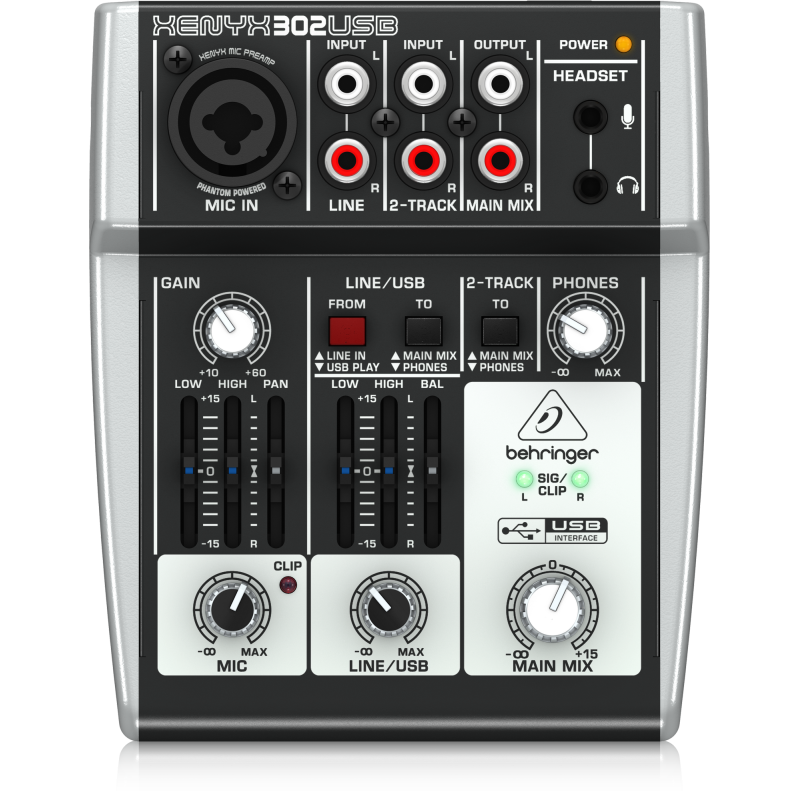 The XENYX 302USB is ideally suited for a small home studio or the on-the-go recording enthusiast. At approximately 4" long and 5" wide (117 x 135 mm), the XENYX 302USB features one of our state-of-the-art, phantom powered XENYX Mic Preamps, an XLR & ¼ " combination input and a stereo USB/Line channel – plus a dedicated 2-Track input.

Need a handy little mixer for the boardroom, or one you can grab with your laptop on the way out the door? Or maybe you don’t want to give up valuable desktop real estate to a large mixer? The XENYX 302USB is ideally suited for a small home studio or the on-the-go recording enthusiast. At approximately 4" long and 5" wide (117 x 135 mm), the XENYX 302USB features one of our state-of-the-art, phantom powered XENYX Mic Preamps, an XLR & ¼ " combination input and a stereo USB/Line channel – plus a dedicated 2-Track input. And since the XENYX 302USB can be powered directly via your laptop’s USB socket, it’s the perfect portable mixer for podcasting and impromptu recording! As a bonus, the ultra-compact 302USB comes with all the recording and editing software needed to turn your computer system into a complete, high-performance home or portable recording studio.

The XENYX 302USB gets its name from our legendary, high headroom XENYX mic preamps, which have been praised by audio engineers all over the world. These state-of-the-art mic pres represent a major step in the evolution of audio technology – and they can easily hold their own, even when compared to the most expensive stand-alone mic preamps. XENYX preamps off er a staggering 130 dB of dynamic range, with a bandwidth that extends from below 10 Hz to well above 200 kHz. Armed with these outstanding mic preamps, the XENYX 302USB provides such transparent, crystal-clear performance you just might think someone upgraded your mics while you weren’t looking.

The British consoles of the 1960s and ‘70s changed the sound of rock and roll – without them the British Invasion might not have happened. Those legendary mixing desks soon became the envy of engineers and producers all over the world. The channel EQ on our XENYX mixers is based on that very same circuitry, allowing you to imbue signals with incredible warmth and detailed musical character. Even when applied generously, these equalizers exhibit sweet forgiveness and superb audio quality.

There was a time when the recording process called for lots and lots of expensive gear, which meant the average musician had to buy time at a recording studio – and that time was pricey indeed. But modern technology has put personal recording well within the reach of virtually anyone with access to a computer. How do you get all that music flying around your brain into your computer? That’s where the XENYX 302USB mixer comes in. Thanks to the included bidirectional stereo USB audio interface, you can connect directly to your PC or Mac computer via a single USB cable. Now any signal source you connect to the mixer can be recorded directly to your hard drive. Which brings us to software…

Free Software Would Be Nice!

Because you’ll want to take full advantage of your XENYX 302USB’s recording and podcasting potential, we’ve included all the software you’ll need for audio recording, editing and even podcasting – all free of charge and downloadable from behringer.com. You’ll be ready to go live on your PC or Mac right out of the box! We’ve also provided a free download of more than 150 virtual instruments and FX plug-ins – turning your computer into a powerful home-based or mobile recording studio from input to output.

No matter what your audio mixing needs, the XENYX 302USB provides the performance and features that can take your talent to the next level, at a price sure to amaze you. Professional sound quality, our legendary XENYX mic preamp, British EQ and built-in USB connectivity make the XENYX 302USB ideal for podcasting, boardroom meetings, speeches or recording. Try one on today – we have one available in your size!